Let’s get to know Earth a little better! Earth’s atmospheric layers are one of our direct relationship values for our work regarding weather. Earth’s atmosphere can be divided (called atmospheric stratification) into 5 main layers. We are reliant on weather for survival, work and safety.

We study the atmospheric changes, climate and volcanic and earthquake activity that may lead to tsunami. Let’s take a few moments to understand better the planet we live on. 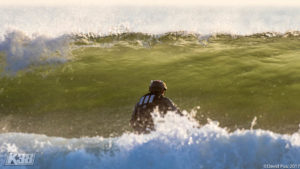 Excluding the exosphere, the atmosphere has 4 primary layers:

The atmosphere of Earth is the layer of gases, commonly known as air, that surrounds the planet Earth and is retained by Earth’s gravity. The atmosphere of Earth protects life on Earth by creating pressure allowing for liquid water to exist on the Earth’s surface, absorbing ultraviolet solar radiation, warming the surface through heat retention (greenhouse effect), and reducing temperature extremes between day and night (the diurnal temperature variation).

By volume, dry air contains 78.09% nitrogen, 20.95% oxygen, 0.93% argon, 0.04% carbon dioxide, and small amounts of other gases. Air also contains a variable amount of water vapor, on average around 1% at sea level, and 0.4% over the entire atmosphere. Air content and atmospheric pressure vary at different layers, and air suitable for use in photosynthesis by terrestrial plants and breathing of terrestrial animals is found only in Earth’s troposphere and in artificial atmospheres.

Water vapor accounts for roughly 0.25% of the atmosphere by mass.

Troposphere
The troposphere starts at the Earth’s surface and extends 8 to 14.5 kilometers high (5 to 9 miles). This part of the atmosphere is the most dense. Almost all weather is in this region.

Stratosphere
The stratosphere starts just above the troposphere and extends to 50 kilometers (31 miles) high. The ozone layer, which absorbs and scatters the solar ultraviolet radiation, is in this layer.

Mesosphere
The mesosphere starts just above the stratosphere and extends to 85 kilometers (53 miles) high. Meteors burn up in this layer

Thermosphere
The thermosphere starts just above the mesosphere and extends to 600 kilometers (372 miles) high. Aurora and satellites occur in this layer.

Ionosphere
The ionosphere is an abundant layer of electrons and ionized atoms and molecules that stretches from about 48 kilometers (30 miles) above the surface to the edge of space at about 965 km (600 mi), overlapping into the mesosphere and thermosphere. This dynamic region grows and shrinks based on solar conditions and divides further into the sub-regions: D, E and F; based on what wavelength of solar radiation is absorbed. The ionosphere is a critical link in the chain of Sun-Earth interactions. This region is what makes radio communications possible.

Exosphere
This is the upper limit of our atmosphere. It extends from the top of the thermosphere up to 10,000 km (6,200 mi).

This spectacular image of sunset on the Indian Ocean was taken by astronauts aboard the International Space Station (ISS). The image presents an edge-on, or limb view, of the Earth’s atmosphere as seen from orbit. The Earth’s curvature is visible along the horizon line, or limb, that extends across the image from centre left to lower right.

Above the darkened surface of the Earth, a brilliant sequence of colours roughly denotes several layers of the atmosphere. Deep oranges and yellows appear in the troposphere, which extends from the Earth’s surface to 6–20 km high. This layer contains over 80 percent of the mass of the atmosphere and almost all of the water vapour, clouds, and precipitation. Several dark cloud layers are visible within this layer. Variations in the colours are due mainly to varying concentrations of either clouds or aerosols (airborne particles or droplets).

The pink to white region above the clouds appears to be the stratosphere; this atmospheric layer generally has little or no clouds and extends up to approximately 50 km above the Earth’s surface. Above the stratosphere, blue layers mark the upper atmosphere (including the mesosphere, thermosphere, ionosphere, and exosphere) as it gradually fades into the blackness of outer space.

The ISS was located over the southern Indian Ocean when this picture was taken, with the astronaut observer looking towards the west. Astronauts aboard the ISS see 16 sunrises and sunsets per day due to their high orbital velocity (greater than 28,000 km per hour).

The multiple chances for photography are fortunate, as at that speed each sunrise or sunset event only lasts a few seconds! Image acquired with a Nikon D3 digital camera, and is provided by the ISS Crew Earth Observations experiment and Image Science & Analysis Laboratory, Johnson Space Center. 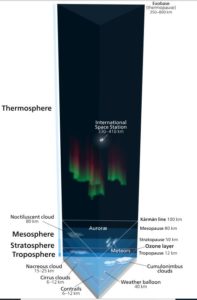